The first time I met John Edwards was in the summer of 1997. He was in Charlotte “for a little case we have in Mecklenburg” and called and said he wanted to talk with me. The year before, I had won the Democratic Primary for Congress in the 9th District, and he wanted to tell me of his plans to become the next United States Senator from North Carolina in the 1998 election.

We got together on a humid mid-afternoon in the restaurant of a SouthPark hotel, and for about 90 minutes — from start to finish — he listened as articulately as he spoke.  He asked broad, open-ended questions but with a focused clarity.  He didn’t dodge a single question of mine, answering softly but with a direct intensity that I could not perceive as anything less than absolute sincerity.

At the end of the discussion, he graciously accepted my explanation that, despite my eager willingness to share  any thoughts and insights he might find helpful, my support (for whatever it was worth) was going to my long-time friend D.G. Martin. 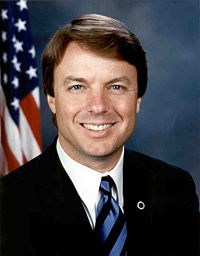 Before we parted, we talked about the law and his “little case” that of course he knew was anything but.  It involved a very significant injury to a baby at birth due to a medical error.  He explained he was at the hotel to conduct two “mock trial” focus groups that evening.  Before I could ask, he volunteered: “Do you want to sit in?”  I joked back, “Is this a trick question?”  Of course I said yes, and that evening I learned more in jury persuasion and trial techniques than I had in all my previous CLE courses combined.

A year later, John went on to defeat my friend D.G. in the 1998 Democratic primary and then upset the Republican incumbent Lauch Faircloth that fall.  Sparked by the immediate leading role he played as a great voice of reason in the Senate trial of President Clinton, his rise to national prominence could only be described as “meteoric.”

While he and I have spoken and seen each other many times since then, I do not pretend to be a close confidant or in any way a part of his inner circle.

One time in particular, I remember seeing him at a reception during his Presidential run in 2004.  It was the night of his South Carolina primary victory.  We chatted about Charlotte, and the fact that Hootie and the Blowfish were going to play at his victory celebration a little later.  Then I asked him a question, and to this day I’m not sure where it came from:  “How are you staying centered?”  He began to answer, and then paused, and seemed to really think about it.  “I try to find a little quiet time every day.  I try to run just about every morning.  And I have a close circle of friends that I really try to stay in touch with.”  He seemed, I think, to enjoy having the opportunity to answer such a question.

On this Memorial Day weekend, 15 years after that very first meeting in a hotel restaurant in SouthPark, I think about John Edwards, and wonder at what point (points?) did he lose his center.  After a week of deliberating, a federal jury still has not reached a decision as to whether he should spend time, maybe decades, in prison.

If “meteoric” is the word to describe his rise to national prominence, I’m still looking for a word to fully describe his fall.

Mike Daisley is a civil litigation attorney and Certified Mediator in Charlotte, North Carolina, and owner and president of "DaisleyLegal" a virtual law firm focused on helping victims of drunk driving injuries and other careless individuals and corporations. He devotes a significant time of his practice as a mediator in North Carolina's Superior Courts, using his 35 years of litigation experience to counsel and assist opposing parties to resolve their disputes and lawsuits cooperatively, avoiding the high expenses and time commitments involved in going to trial. In addition to his commitment to Civil Trial Advocacy and Alternative Dispute Resolution, Mike is also an avid writer, and has a wide array of interests outside of his legal practice, including stints as a columnist for The Charlotte Observer, political analyst for WCNC-TV and WBT Radio. Mike’s biggest passion outside the law is learning and writing about theology, and especially the role doubt plays in faith, the role faith plays (or should play) in politics, and (as he puts it) the “beauty and deep mystery” of the liturgy. Mike is a lifelong Episcopalian, and often jokes that means "I am a raging agnostic at least two or three days a week.” In 2019, he was appointed by the Bishop of the Episcopal Diocese of North Carolina as a licensed Lay Preacher in the Episcopal Church. (A sample of Mike’s preaching can be heard here: http://www.stmartins-charlotte.org/content.cfm?id=2245&download_id=269#attached_content) To discuss the possibility of teaching, lecture, sermon or interview requests (or to make any comments or suggestions about the “WithGladness” blog) you may contact Mike at any Office email : Mike@DaisleyLegal.com Personal email: MikeDaisley@outlook.com Office voicemail: (704) 554-2306 Mike Daisley & Associates, LLC 1515 Mockingbird Lane, Suite 400 Charlotte, North Carolina 28209
View all posts by Mike Daisley - Civil Litigation Attorney, Mediator, Writer, Licensed Lay Preacher (Episcopal Church, Diocese of North Carolina) →
This entry was posted in The View from "The Trenches", Uncategorized. Bookmark the permalink.

1 Response to The first time I met John Edwards…